In an age where relationships between the sexes were severely constrained, the prominent Bloomsberries flouted contemporary conventional styles of living. Consequently they left behind them a legacy of lifestyles far more radical and experimental than that of the recently departed Victorian Age with all its associated puritanism. This newfound attitude to sexuality and the human body is evident in the pencil sketch below by Duncan Grant, from the Angelica Garnett Gift. 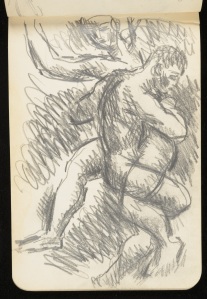 Certain strands that lie behind the inspiration of such a sketch can be unpicked; Grant was the carrier of a tradition evident in English art and literature and originating in the works of Byron regarding the sanctity of ancient Greece, where ‘homoeroticism was not merely tolerated but celebrated as the highest manifestation of sensual and intellectual bonding between men.’[1] Known to have travelled to such exotic destinations including Greece and Italy during the early 20th century, in a letter written whilst abroad to Lytton Strachey, Grant writes:

‘I often in my journey by the sea longed to get out and live the rest of my life unbeknownst and lost among the beautiful youths I saw playing about in and out of the mirror-like sea with roses trailing on the sands.’[2]

It is this ideal of sensual Mediterranean indulgences that informed much of Grant’s artistic interest and vision in drawing the naked male form,  including works within the Charleston’s collection, such as a male nude swimmer, produced in the Omega Workshops. 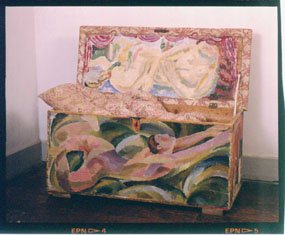 Indeed Clive Bell, writing in 1920 claimed ‘there is something Greek about Grant, the romantic, sensuous Hellenism of the English literary tradition’, [3] whilst Roger Fry commented that Grant’s art had a certain ‘Doric delicacy.’[4]

Inevitably of course, Grant was also influenced by subject matter more close at hand to him back home in England; following the inauguration of George V there was an underlined association between the new monarch’s patronage of sport and the public spectacle of ‘manly’ games. As a result Grant was known to have gained insight into the male form through watching swimming competitions as well as attending football, wrestling and rugby matches.

With varying inspirations, Grant’s nudes, particularly those from the 1950s are frequently considered his best works. Following scholar Simon Watney (1990, p. 69), it is in  such pieces that ‘Grant responded in the most direct and spontaneous way to the sensual pleasures of seeing.’ [5]