The Children of the Angelica Garnett Gift

Pre-Bloomsbury, childhood was no fun. Victorian orthodoxy dictated both austerity and hardship that children were meant to endure. This educational philosophy was reversed by the increasing popularity of philosopher Jean-Jacques Rousseau’s book ‘Emile, or on Education’, which espoused a view of childhood as necessarily uncorrupted and free from the distorting values of society. Although it is unclear whether Vanessa Bell had ever explicitly read Rousseau, his influences can be felt in her attitude that children should grow up free from the stranglehold of Victorian teachings. As Virginia Nicholson notes in her book (2002, p. 72), Vanessa Bell would frequently follow her children around with a camera, ‘capturing their cherubic nakedness, or their intent absorption in the mud of the cattle pond, or a burgeoning soap-bubble, or a flower. Julian, Quentin and Angelica grew up barefoot and naked; children of nature.’ [1] 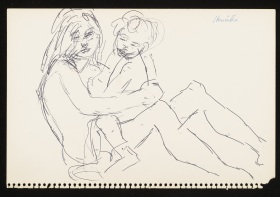 The evidence from the Angelica Garnett Gift highlights this playful and carefree attitude the Bloomsbury group had with children, seen both above and below.

CHA/P/656. Julian Bell as a Child. ©The Charleston Trust.

[1] For further information on the Bloomsbury group and their views on education, see: Nicholson, Virginia., 2002. Among the Bohemians: Experiments in Living 1900 – 1939 (London: Viking).