Spotlight Lectures: Research in the Attic

Next Thursday we will be presenting our research through public lectures held at Charleston in the historic barns. We will talk about our individual research projects looking in depth at items found in The Angelica Garnett Gift. These talks mark the beginning of the summer season and the house will also be open accessed via guided tour which you can book here. Book a place on our Spotlight lectures here.

Please do come to this free event and talk to us about our projects and the Angelica Garnett Gift. Here are some introductions to our talks: 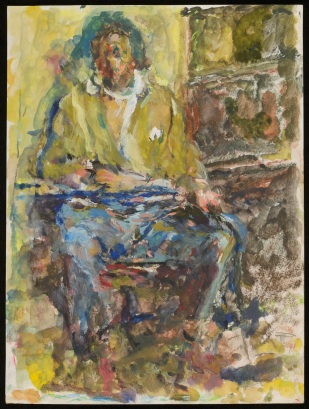 The Angelica Garnett Gift exposes the extent to which Bell and Grant sketched, both casually for pleasure and as a mode of thinking through concepts for their work. Sketching – especially in such volume – appears to voice an admission regarding representation itself. Their throwaway, unserious, unfixed quality shrugs before the monumentalising pressure of the portrait. Unsure of itself ontologically and aesthetically, the sketch offered a medium closer to Bell and Grant’s perception of human life. Conditioned by shifts in science, philosophy and psychoanalysis, the British avant-garde began to understand and depict experience as fluid, unstable and marked by a profound alienation.

This paper will argue that the importance afforded to sketching surfaces in the incorporation of its visual vocabulary into Vanessa Bell’s portraits, which are characterized by blurred, featureless faces. 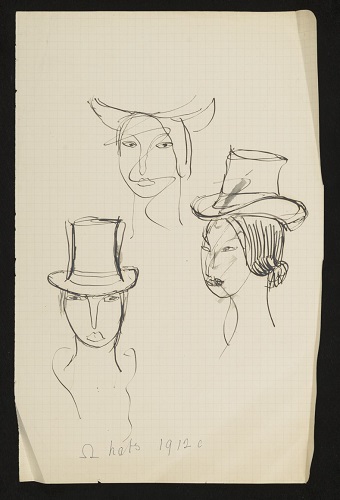 In her letters as a young woman Vanessa Bell illustrates her stories of sartorial conquests with sketches of the silk coats and dress shapes that hung in her wardrobe. She delighted in purchasing fabrics abroad and went on to suggest dress design as an endeavour for the Omega Workshops. Duncan Grant’s career also shows an active interest in dress through his costume designs for the theatre and in his Omega hat and fan designs. However, the importance of dress is often overlooked in Bloomsbury academia. I seek to illuminate the pervasive presence of dress as a mode of expression in the work and lives of Bell, Grant, and their contemporaries. My argument pivots upon two specific sartorial finds in the Angelica Garnett Gift consisting of two pages of hat designs by Duncan Grant annotated “Omega Hats 1912.c.” and a Vanessa Bell sketchbook that reworks the image of the fan, resulting in a pattern design for a printed fabric in c.1946. Both reinterpret these specifically Victorian styles to make statements about Modern identity through dress.