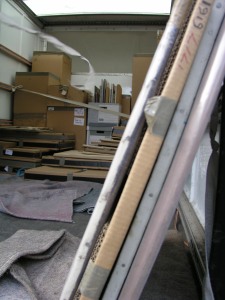 “It is the house… who has taken over. It is she who is now the personality, the centre of attention….She is mysteriously alive, with the life given her by Vanessa and Duncan, and proves to be still full of secrets, like some latter-day Sybil”

Angelica Garnett, ‘The Restoration of Charleston’, A Cézanne in the Hedge, p.166-7

Though Angelica Garnett’s relationship to her past and her artistic parents, Vanessa Bell and Duncan Grant, was a complicated and not always happy one (Frances Spalding described her Bloomsbury upbringing as ‘both a blessing and a burden’ http://www.theguardian.com/artanddesign/2012/may/07/angelica-garnett), their home at Charleston held a special place in her heart. She was a vocal supporter of its restoration and re-opening, and gifted the paintings, sketchbooks, and works on paper pertaining to her parents to Charleston – now a flourishing house museum.

Angelica Vanessa Garnett, née Bell  (1918-2012) was born at the house soon after the Great War Armistice – a beacon of hope for peace and a bright future. She became a writer and artist in her own right, and her books include an autobiography, Deceived With Kindness: A Bloomsbury Childhood, and a autobiographically-based collection of short stories, The Unspoken Truth, as well as several books about Charleston.

The Angelica Garnett Gift is an incredibly rich resource consisting of 8,000 works, many previously unseen. Bursting with sketches of local life, the Gift has the potential to become an extremely important archive of Bell and Grant’s work, giving us significant insights into their processes and revealing the patience, hard work, and flashes of sheer talent that poured into their work. As part of Charleston’s Centenary Project funded by the Heritage Lottery Fund, The Elizabeth Cayzer Charitable Trust, The Michael Marks Charitable Trust, and The Paul Mellon Centre for Studies in British Art, twelve early-career art historians and curators will work in six-month stints over the next three years to catalogue the collection. In doing so they will make it available for public viewing, discover the ways in which this important archive can contribute to existing Charleston scholarship, and generate further discourse on twentieth century Art History.