Grant, Hughes and Hogg: A Vision of History

Every once in a while we find an item in the attic that is as perplexing as it is interesting and requires some serious investigation to decode its meaning. Such an item came to our attention this week; a charming sketch of a man in historical costume with two names in the hand of Duncan Grant inscribed on the back; those of Talbot Hughes and John Hogg.

The name Talbot Hughes is familiar, practising as a genre artist exhibiting at the Royal Academy and the Society of British Artists he also amassed a large collection of English historical costumes and accessories, dating from the 16th to the 19th centuries. An admirer of the French classicist painter Jean-Louis-Ernest Meissonier, Hughes was meticulous in his attention to detail and his extensive costume collection allowed him to style his models for his artworks accurately. The 752 piece collection of garments and accessories were sold to Harrods in 1913 for the sum of £2,500 and were displayed at the store for three weeks before they were sent to the Victoria and Albert Museum, where they went on display on Christmas eve 1913.

In comparison to the wealth of information about the life, art and collections of Talbot Hughes, details about John Hogg proved to be more elusive and the connection between the two hard to fathom. It was when research revealed that Hogg had been a publisher working in London in the early twentieth century, publishing titles such as ‘Silverwork and Jewellery: a textbook for students and workers in metal’ that things began to fall into place.

In the year that Hughes sold his collection to Harrods he also collaborated with Hogg in the production of a book titled ‘Dress design: an account of costumes for artists and dressmakers, illustrated by the author from old examples.’ The contents of the book demonstrate the wealth of Hughes’ knowledge on the subject and the varied nature of his collection with chapters ranging from ‘prehistoric dress’ to ‘the character of decoration and trimmings of the eighteenth century.’ Adorning the pages of the 1913 edition are illustrations of costumes throughout the ages by Hughes, demonstrating the attention to detail he is known for in his paintings. Grant’s drawing that we found nestled in the boxes from the Angelica Garnett Gift appears to be a study from this book, his handwritten notes on the back providing helpful clues to the images origin. 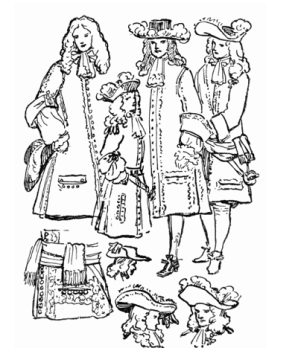 Previous blog posts such as ‘Ballet and the Bloomsbury Group’ have explored Duncan Grant’s artistic relationship with costume design and the theatre. Grant’s practice of studying artworks for his own artistic development and for inspiration has also been explored in relation to the Angelica Garnett Gift with a blog post about the studies of Raphael. Why Grant chose this particular costume to sketch we can only speculate, it may be that there are many other costume studies yet to be found in the Gift. We know that Grant was commissioned in 1914 to produce costumes for Jacques Copeau’s adaptation of Twelfth Night by Theodore Lascaris, a creative collaboration between the two men that was to continue until the outbreak of war in 1918. Designing the costumes for the production Grant desired to sustain the mood of comedy and as a result ignored details such as hats and swords, neglecting historical reality in favour of shape and fluidity, something Hughes no doubt would look upon negatively. Earlier in our exploration of the Gift we uncovered possible sketched designs for a production of Macbeth by Granville Barker in 1912, a project which was later abandoned in 1913. Could the study of historical costume found this week in the attic be connected to either of these Shakespeare productions or does it represent Grant’s artistic diversity and self-imposed life long education as an artist? Whatever the sketch’s original purpose, today it represents a fascinating insight into Grant’s artistic practice, as well as being a beautiful and interesting drawing.

We recently found a painting in the Angelica Garnett Gift by Duncan Grant which depicts a landscape far away from Sussex that was painted some time before Vanessa Bell, Grant and Bunny Garnett moved to Charleston; a token of the artist’s life and love a decade before his partnership with Bell at the house began.

In 1908 Grant’s romance with his cousin, Lytton Strachey, was coming to a close. With Lytton away lecturing in economics at Cambridge University, Grant grew increasingly close to Lytton’s friend, former lover, and fellow Apostle, the economist John Maynard Keynes. On discovering Grant and Keynes’ blossoming romance on his return to London,  Strachey was deeply aggrieved: ‘Of all the darkly amorous crises sprinkled throughout his life,’ writes Strachey’s biographer Michael Holroyd, ‘this was perhaps the most wretched.’ Having confided in Keynes about Grant, and in Grant about Keynes, Strachey felt both humiliated and betrayed now that his two close companions had united: ‘It came as an explosive shock,’ Holroyd writes, ‘a kind of death. Like the violent eruption of an earthquake which alters every feature in the surrounding landscape, this sudden revelation destroyed in a few moments the whole structure of his last three years.’ As Grant’s biographer Frances Spalding observes,

Now [Strachey] had to realise that he had lost both idol and confidant, a double blow that must have left him horribly alone. He was also extremely sceptical about Maynard’s capacity for love and raged against him to his brother James, privately dismissing his rival as ‘a safety-bicycle with genitals’.

In spite of his personal grief, however, Strachey made a concerted effort to remain on good terms with his two friends, offering to pay Grant’s painting tuition fees and sending Keynes a parcel of books ‘to adorn his rooms at King’s’. Although seemingly warm-hearted gestures, Holroyd has suggested that Strachey’s actions were motivated by the belief that, ‘his behaviour might win him back some of the esteem which he had shed, and at the same time prompt feelings of guilt in his treacherous friends.’

Despite Lytton’s heartbreak – and the feelings of regret his gifts did provoke in the pair –  Grant and Keynes continued to see one another. At the height of their romance in July of that year, Grant was invited away for the summer. ‘I have just received an invitation to go and spend some time in the Orkney Islands with a millionaire who owns Hoy,’ Grant wrote to Keynes, referring to a friend of his mother’s, Thomas Middlemore, who in 1898 had bought the island for £32000. ‘Much as I love the Orkneys,’ he declared, ‘I love you more and don’t know what to do. Do advise me.’ Keynes readily agreed to join Grant for the holiday, a trip that would be bitterly referred to by Strachey as the couple’s ‘Honeymoon’.

Duncan travelled to Hoy ahead of Keynes, a mammoth twenty-seven hour journey that would take him first to Stromness, then by ferry and motorboat to Melsetter, Middlemore’s estate on Hoy. Spalding describes the journey:

The small boat tossed and dipped in a stormy sea for what seemed like three hours, but Duncan, drenched to the skin, thoroughly enjoyed himself, observing the cormorants, the seals, the spray and the colours in the islands, sea and sky. Even so, he was glad of the champagne given him on arrival.

After two days Grant had already grown tired of his fellow guests at Melsetter and eagerly awaited Keynes’ arrival. ‘Dearest’ he penned, ‘at this moment I would give my soul to the Devil if I could kiss you and be kissed.’ Deciding to leave the estate and stay elsewhere when Keynes arrived, Grant wrote to tell him that he had discovered the perfect location for their holiday, describing the village – called Rackwick – as a place, ‘Where the people are frequently mad from too frequent incest…There is no priest, no church and no policemen. Don’t you think we’d better go there at once?’

Keynes joined Grant on the island on the 18th August, 1908. Together the couple led a peaceful and orderly existence over the coming weeks. Each would spend several hours a day working; Keynes would write (he began his ‘Theory of Probability’ on Hoy) and Grant would paint (Grant started his celebrated portrait of Keynes that was purchased by the sitter’s father and later bequeathed to King’s College Cambridge, in whose collection it remains today). When the pair were not at work they would read Jane Austen aloud to one another and go for long hikes to explore the island’s glorious landscape. The painting in the Angelica Garnett Gift that inspired this blog post is a careful watercolour study of Hoy, and was quite likely to have been painted during this 1908 trip. While the work has been dated 1905 on the back in pen, it is quite possible that this date was assigned after its production, as Grant would often sign and post-date (often inaccurately) his works for sale later in life.

It was with much reluctance that in late October the two friends departed Hoy, Keynes travelling back to Cambridge, Grant to Rothiemurchus where he spent a few days at his family’s ancestral home, the Doune. Writing to Keynes from this remote and idyllic location, Grant admitted:

This place is so gorgeously lovely that the Orkneys have been blotted out of my visual memory…but not you.

Despite their happiness, the closeness that the couple had experienced during their summer on Hoy would not be felt to such an extent again, and in April 1909 Grant admitted to James Strachey that he was no longer in love with Keynes. Lytton Strachey, now released from the anxiety that the affair had provoked in him, commiserated with Keynes, his words filled with sympathy if also tinged slightly with relief:

Love’s the very devil. But it is Time’s fool; and my experience is that when it’s once flown finally out of the window one’s astonished to find one can get on well without it. 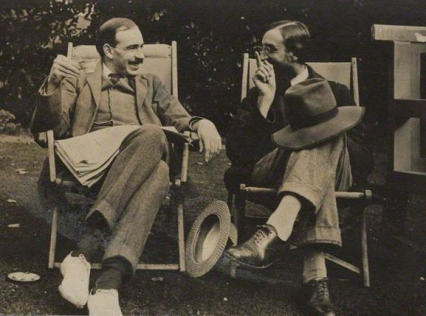