This week, Charleston celebrates a very special birthday – the 100th birthday of Anne Olivier Bell (née Popham) – Charleston’s President, and a prominent editor . In her 98th year, Mrs Bell received an MBE in honour of her longstanding services to art and literature, and looking back at her remarkable career, it is not difficult to see why. 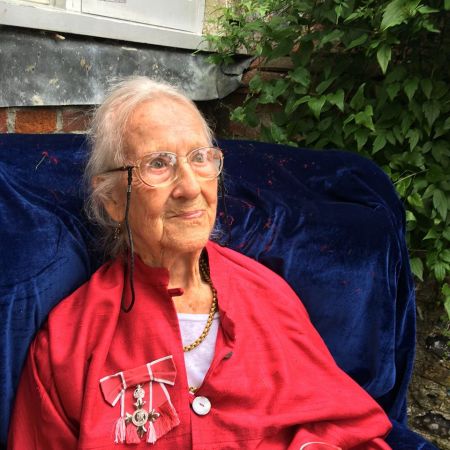 Anne Olivier Popham trained as an art historian at the Courtauld Institute in the 1930s. The family had an artistic background; her father, Arthur Ewart Popham, was Keeper of the Department of Prints and Drawings at the British Museum. .

During the second world war, all women were expected to do work of national importance, and Anne Popham was no exception. She was employed by the Ministry of Information as a research assistant in the Photographs and Public Divisions. . In 1945, after the war had ended, she was recruited to join the so-called ‘Monuments Men’, a group of men and women from thirteen different nations who formed the Monuments, Fine Arts and Archives branch of the German Control Commission:

‘Many were museum directors, curators, art historians, architects and educators. Together they worked together to protect monuments and other cultural treasures from the destruction of World War II. In the last year of the War, they tracked, located, and in the years that followed returned more than five million artistic and cultural items stolen by Hitler and the Nazis. Their role in preserving cultural treasures was without precedent.’

[Robert Edsel, Founder and Chairman of the Board for the Monuments Men Foundation for the Preservation of Art]

In November that year, Miss Popham was posted to the MFAA Branch of the Control Commission based in Bünde, Westphalia in the British zone, where she co-ordinated the Branch Officers’ work. Her diaries from this two-year period, now preserved in the Imperial War Museum, chart the purposeful pace in which she and her colleagues carried out this stressful work.. As she recalls: ‘There was always a great deal of tension between the needs of the Military and the requirements of the Monuments Officers, especially in the invasion of France…’

In 1947 Popham returned to London, where she worked in the Exhibitions Department of the Arts Council of Great Britain (formed after the Second World War by John Maynard Keynes, who was appointed the first official Chair). Here, her proven flair for scholarship proved useful in her editing of exhibition catalogues.

It was not long afterwards that Olivier met Quentin, the son of the renowned art critic Clive Bell, , and Vanessa Bell, one half of the Bloomsbury painterly duo, who invited her to Charleston to sit for a portrait.

Quentin Bell was a painter and ceramicist who would later become Professor of Art History at Leeds University, and Professor of History and Theory of Art at Sussex University. In the 1960s Anne Olivier Bell worked with her husband on the first authorised biography of Virginia Woolf, published in 1972. This was followed by the publication of Woolf’s five-volume 1915-19 diaries, which she edited over the years between 1977 – 1984. These diaries, in their published form, have become a primary resource for the study and appreciation of Woolf and Bloomsbury.In recognition of this work Olivier Bell has received honorary doctorates from Sussex and York universities. 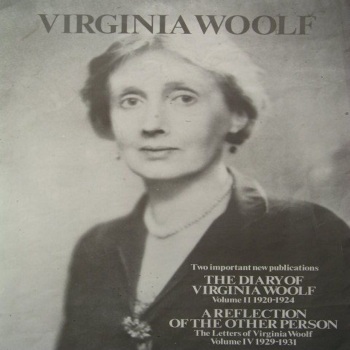 CHA/E/41 Recto. Poster, a 1978 poster of Virginia Woolf advertising the publication of Volume 2 of her letters by the Hogarth Press, edited by Anne Oliver Bell. Photograph © The Charleston Trust

Anne Popham’s only encounter with Virginia Woolf was fleeting; she recalls noticing ‘this beautiful lady in a red silk dress’ at a Bloomsbury party. Vanessa Bell’s painting, ‘The Garden Room at Charleston’, captures perfectly the atmosphere of Anne Olivier Popham’s early visits to Charleston. The French windows are open to the garden, bright and lush, and one can sense the warmth of the afternoon. Miss Popham is the figure depicted sitting in a chair, turned towards the garden. In picturing this summery scene, it is easy to imagine the draw of the idyllic countryside to a London girl. Although she remembers feeling slightly daunted by the witty intellectuals with their interesting talk, she formed a good relationship with the artists Vanessa Bell and Duncan Grant. Quentin Bell was also charmed by her, and asked her if he could model her head in clay. They were married in 1952.

In 1953, Vanessa Bell painted Anne Olivier Bell’s portrait again. The new Mrs Bell holds herself upright, her gaze directed thoughtfully into the distance. She is smartly dressed and looks dignified, and the same can be said about the recent photograph of her, taken 63 years later in the garden of her Sussex home at her centenary birthday party. Some things are timeless.