Apollo in his Temple 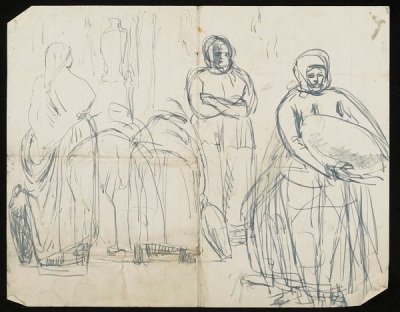 In February 1910 Duncan Grant was invited by Maynard Keynes to join him on a visit to Greece and Asia Minor. While their physical relationship was over by this time, as detailed in an earlier blog post here, the couple remained close friends and continued to travel abroad together, their trips often funded by Keynes. These excursions provided an ideal opportunity for Grant to visit galleries and heritage sites, and to paint and draw local landscapes and people. The creative results of his observations are captured in numerous sketchbooks and upon loose sheets of paper found within the Angelica Garnett Gift.

A particularly interesting token of the 1910 trip was recently uncovered; a thin sheet of lined writing paper upon which a hastily-drawn group of women in long robes and headscarves has been sketched. Like many of the loose works in the Gift this object has dual status, as upon turning the page we discover that Grant has sketched the scene on the back of a letter sent to Keynes by the Compagnie Messageries Meritimes confirming his booking for the Paquebot Senegal, the boat that would take the two friends from Piraeus to Troy on the 12th April, 1910. Although the drawing could have been made later than this (as detailed on the blog previously, Grant often kept materials to use at a later date) it is quite likely that Grant made the drawing during this trip with Keynes.

Duncan and Maynard left London on 17th March 1910 and were away for seven weeks in all. They travelled by boat from Marseilles to Athens, and on arrival found a hotel that faced the Acropolis. In Athens they employed a dragoman to accompany them on a journey by horse through the Pelopommese. They travelled through mountain villages to Bassae, carrying food supplies with them. It was a memorable trip. ‘I must tell you about Greece when I see you,’ Duncan wrote to Lytton. ‘It is a divine country…but the remains of ancient Greece. Oh! how melancholy they make one.’

While at Bassae Keynes photographed Grant posing nude, in the guise of a Greek god: ‘I developed Apollo in his temple at Bassae yesterday and printed him to-day,’ Maynard told Duncan. ‘He is lovely…It will be quite unnecessary to take in the Sportszeitung anymore.’

They moved on to Turkey, travelling on the Paquebot Senegal, stopping at Troy where they stayed with an English couple who owned a farm on the banks of the Skemander. At St Smyrna they were both much taken with the exotic colours and noises of the bazaar. However, Duncan was disappointed with Constantinople, finding it too large and its narrow streets filthy, though he thought the Hagia Sophia one of the most impressive buildings he had ever seen. He felt much happier at Brusa, the ancient Ottoman capital, with its magnificent mosques, tall minarets, cypresses and hot spring baths, situated amid beautiful scenery overlooked by Mount Olympus. One of the most significant experiences of all was the opportunity to familiarise himself with Byzantine mosaics.

Later the same year Roger Fry’s First Post-Impressionist Exhibition opened at the Grafton Galleries to much excitement and controversy. The show would have a deep and lasting impact not only on Grant and other members of the Bloomsbury group, but also the wider art world and gallery-going public. Grant’s work of 1911 to 1912 reveals the impact of the Post-Impressionists, but also of his discovery of Byzantine mosaics and romanesque decoration seen on excursions abroad such as the 1910 trip with Keynes.

His painting titled On the Roof, 38 Brunswick Square made in 1912 has been seen to combine such sources. Depicting Virginia Stephen, Adrian Stephen and Leonard Woolf relaxing on the mezzanine roof at the back of the large eighteenth century house shared by the Stephen siblings and their friends, the painting’s pointillist brushwork, flat picture plane and mosaic-like patches of colour present an amalgamation of the cultural, historical and artistic sources influencing the artist at this time. 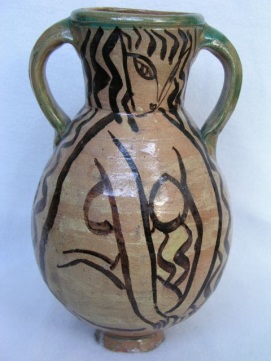 Such influences are also reflected in a number of Grant’s decorative works made during this period, an example being a vase purchased and decorated by Grant in Tunis during a trip in 1911 and displayed in the Studio at Charleston. This vase combines both the influence of Post-Impressionist design with its calligraphic nude (Grant was particularly impressed by Henri Matisse’s ceramic works shown at Fry’s 1910 exhibition), and the utilitarian form of traditional Tunisian earthenware. 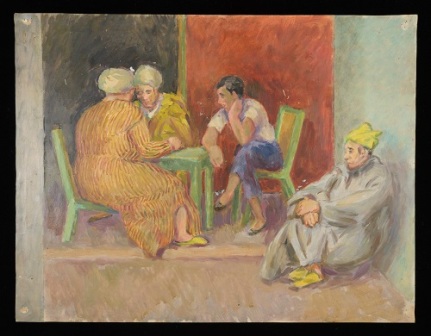 Grant continued to travel and paint abroad, even in his old age. This large painting, found in the Angelica Garnett Gift, depicts a scene witnessed by Grant during a trip to southern Turkey with his close friend Paul Roche in 1973.

In addition to its role as a biographical object, the letter sent to Maynard Keynes is interesting for its inclusion in the Angelica Garnett Gift in the first place. The 8000 items that make up the archive all originated at Charleston and were only taken into storage after Grant died in the 1970s. The artists did not move to Charleston until 1916, therefore this letter and its accompanying drawing had been kept by Grant and moved to the house amongst all manner of personal affects years after it was first received by Keynes in Athens during his trip with Grant in 1910.

August in the Attic

Eveline with a painting by Vanessa Bell from the Angelica Garnett Gift. Photograph © The Charleston Trust

Up in the attic studio at Charleston we have been privileged to learn so much about photographing, cataloguing, researching and caring for the fascinating objects in the Angelica Garnett Gift. As it is wonderful for others to have the opportunity to work with the collection, it was a pleasure to welcome visiting museum professional, Eveline Mols, from Holland in August. Before commencing a new role at Museum Gouda, she spent two weeks at Charleston to gain an insight into collections care at a British heritage institution. 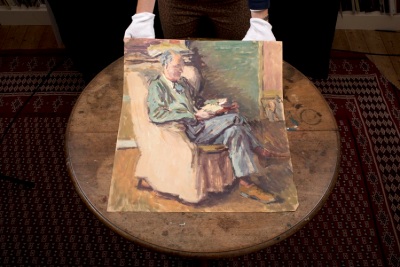 Eveline has reflected upon her experience with us:

Charleston and the intellectual legacy of Bloomsbury are an inspiration to me.

For two weeks I was given the opportunity to work closely and behind the scenes with an exceptional collection.

For me as a conservation manager Charleston is a very interesting case. I do not need to explain why. I am now able to see how Charleston operates in terms of preventive conservation.

I had the unique experience of just being in the house, in the heart of it all, to constantly think that they, the members of the Bloomsbury group, especially Vanessa, lived their lives in this house.

It was lovely to work on the Gift with another early-career museum professional and we wish Eveline the best of luck in her new position at the Museum Gouda.

Over the coming weeks we will be giving free public talks about our research at Charleston which focus upon items uncovered in the Angelica Garnett Gift. These papers mark the end of our residency at the Trust, as it will soon be time to hand over the Attic torch to Charleston’s two new interns and depart for pastures new. These talks are the culmination of our individual research projects, and will – we hope – offer new insights into the lives and work of Duncan Grant and Vanessa Bell through largely unseen objects and artworks. 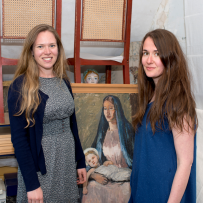 Alice and Samantha in the Attic at Charleston, with Vanessa Bell’s study of Angelica Garnett as the Virgin Mary for the Berwick Church murals. Photograph © The Charleston Trust

The Creative Consequences of the War: The 1940 Venice Biennale

On Thursday 10th September Alice Purkiss will be presenting her research on Duncan Grant’s involvement with the 1940 Venice Biennale. Having received the invitation in 1939, Grant had set about selecting paintings for display, however, only months before the works were due to travel to Italy, the British Council withdrew from the show. Although the official reason given was due to the risk of sending valuable artworks abroad in wartime circumstances, political forces were also at play. Inspired by Grant’s own invitation to the show that was found within the boxes of the Angelica Garnett Gift in the Attic Studio, Alice’s talk will explore a significant moment in both British art history and Grant’s career at the beginning of the Second World War. 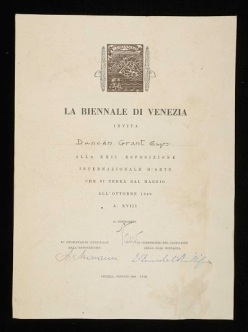 The Maternal Paradox: The Private Portraiture of Vanessa Bell

On Thursday 17th September Samantha Wilson will be presenting her work on Vanessa Bell’s dichotomous role as artist and mother. Samantha’s talk is focussed upon a sketchbook dated 1908 which contains drawings made by Bell of her son, Julian, as a child. As a deeply personal and private object, the sketchbook demonstrates both the love and pride of a mother and the artistic desire to explore a constantly changing subject. In her talk, Samantha considers the uneasy relationship between the eye of the mother and that of the artist, and how the emotional attachment of one can cause conflict with the practical detachment of the other.

Both talks will be held at Charleston, at 1pm on the specified days, and will last roughly 30 minutes. The talks are free to attend and do not require booking. Charleston is open for guided tours on the days of the talks, as are the garden, café and shop. House tours can be booked online here.