“to become a child is to be very literal; to find everything so strange nothing is surprising” (Virginia Woolf, ‘Lewis Carroll’)

Can art catapult one back to childhood? Woolf’s reading of Alice in Wonderland – written when her niece Angelica Garnett was a newly mature twenty one – responds cheerfully in the affirmative. This week in the gift we discovered a collection of childhood drawings by Angelica Garnett; immersed in their whimsical world of elaborately dressed dowagers, fugitive pets and fairy princesses, we too can concur with Woolf’s statement. 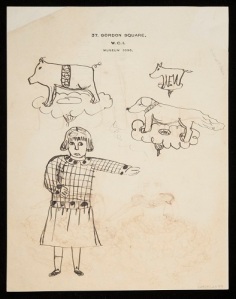 The first stages a triumphant escape by a trio of varyingly domesticated animals: a pig charges forth upon an enormous daisy, followed by two similarly transported dogs. A young woman looks uneasily upon the scene from below, her arm outstretched in appeal. Woolf’s spaniel Pinka frequently visited Charleston during Garnett’s childhood – if not floating on flowers then certainly frolicking amongst them – but such jaunts were necessarily fleeting. Indeed, Garnett’s puzzling little sketch may appear trivial, but it evokes a mood both playful and plaintive strikingly commensurate with her recollection of childhood in Deceived with Kindness (1984).

Overleaf, Garnett’s young woman makes a partial return: her severe bob is suddenly in bejewelled bouclés; her gesture of anguish replicated as an expression of etiquette by two (rather sullen) debutantes in full crinoline. A neat, prim signature is followed by a sprawling, decorative reiteration, only to transform again into a tiny set of initials floating by a woman’s head like a stray sartorial embellishment. Practicing her signature, Garnett might also be understood as rehearsing alternate identities, an experiment with selfhood as provisional and fanciful as her drawings. 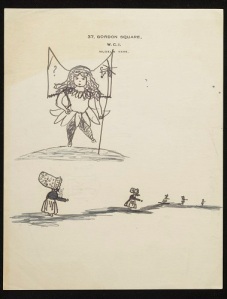 The next shows a fairy en pointe holding a star-spangled staff, wearing a shapely bodiced dress and a petal tutu. Garnett’s fairy queen displays a delight in costume styling reminiscent, perhaps, of  Duncan Grant’s elaborate ballet designs previously explored on the blog. Beneath her a series of bonneted women scurry into the distance, one arm held aloft; Garnett’s figures become incrementally smaller, until the woman’s form is suggested merely by a collection of inky dots. Here the infant artist does not merely draw for pleasure or identity practice, but sketches as a form of self-schooling, attempting a study of movement and perspective.

Notable too in Garnett’s drawings is her choice of canvas. Conventional sketch pads are shunned, with Garnett composing instead upon the letter paper of 37 Gordon Square; a location that remains, however, curiously absent from Garnett’s memoir. Vanessa Bell moved to number 37 with her four year old daughter in 1922 and remained there until 1929, but it is 46 Gordon Square that Garnett recalls as site of infant artistic experimentation and play. Whether ‘paper-cutting’ chains of ‘ballet dancers’ and ‘exotic flowers’, or receiving a painting lesson from Vanessa (if regrettably, ‘almost the only’ one) Garnett recalls relishing the creative opportunities afforded by living amongst the artists and intellectuals of their London address.

And yet, looking again at Garnett’s fantastical sketches, the exclusion of 37 Gordon Square from the realm of autobiographical realism seems rather fitting. A space productive of fantasy must also bear its imprint, remaining concealed from prying, public eyes. Although composed upon letter paper, Garnett’s drawings are not necessarily seeking a recipient: was Garnett hoping to circulate these images amongst her family and friends as if they were, indeed, dispatches from her interior world, or was she merely visualising its structures and subjects to reinforce its private reality?

Garnett’s fantasy world is evidently ‘quite unlike ours’ (as Vanessa Bell remarks of the visions saturating her own childhood) yet it does cast an illuminating light over the art world of Garnett’s infancy.

Roger Fry lauded the ‘direct expressiveness’ of artwork by children, seeing their capacity to convey emotion as far surpassing the abilities of their adult counterparts. An exhibition of children’s drawings at the Omega Workshops in 1917 cemented Fry’s celebration of their work as not merely a trifling interest, but as a serious challenge to the hierarchies and limitations of the conventional art historical canon. Published concurrently to the exhibition, Fry articulated the particular power of their work in an article for The Burlington Magazine. In ‘Children’s Drawings’ Fry highlights a sketch of a snake by nine year old David John (son of artist Augustus John) arguing that his drawing – if appearing naïve – uniquely embodied ‘the snakiness of the snake’. Motivated solely by ‘a vivid directness of feeling’, children can approach the canvas unobstructed by tradition or regulation. Figurative study constitutes an important part of any artistic apprenticeship, but Fry frames the child-artist as more creator than copier, more concerned with imagination than mimesis:

‘Children, if left to themselves, never, I believe, copy what they see, never, as we say, “draw from nature”, but express, with a delightful freedom and sincerity, the mental images which make up their own imaginative lives.’

The energy and inventiveness of Garnett’s drawings suggest a home environment where her imaginative life and its expression were encouraged. Fry was, after all, ‘a grandfather with paternal and avuncular overtones’; judging by Garnett’s charming early work, one might assume his benevolent presence moved easily from the affectionate to the artistic.

A nascent talent can be seen in full bloom in Garnett’s later paintings.  Here Garnett depicts a very different pair of young women: her daughters. 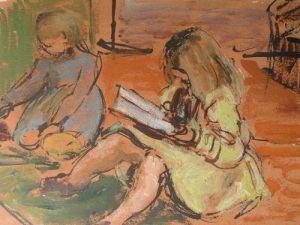